Atiku Supporters Are After My Life – PDP BOT Chairman Cries Out 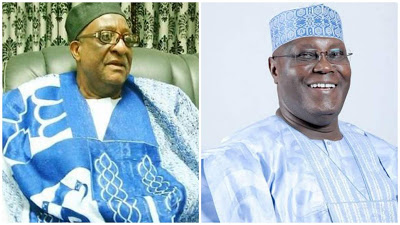 Senator Walid Jibrin who is the Sarkin (leader) of Fulani in Nasarawa state, and the Chairman, Board of Trustees of the Peoples Democratic Party (PDP) has alleged that some individuals believed to be supporters of former Vice President of Nigeria, Atiku Abubakar, are after his life over the 2023 Presidential ticket of the party.

Senator Walid Jibrin who made the allegation in a press statement in Abuja on Thursday, stated that the threats are not unconnected with the presidential ticket of the party and his failure to openly declare that the ticket will be given to Atiku.

I have received calls from some people threatening my life over my coming out not to mention that the presidency of this country be zoned to the Northeast. They were saying that I am a traitor, that I should have come out to say that it is only Atiku Abubakar, that because I said that Atiku was already overthrown by the Supreme Court. They said for that, I should say Atiku is the man.

ALSO READ: Prophet Reveals What God Told Him About Atiku, Tinubu, Others

We have not even discussed about zoning so why are some people so concerned about the presidential ticket being zoned to a particular zone.

About three people went to Wadata Plaza and demanded to see the Chief Security Officer, Munir Yerima. When they were there, Yerima rang me asking where am I and I said I’m in Kaduna, then he said some people want to talk to me and I said let me talk to them on phone, he said they are intermediary between me and some party people that they said I have gone astray and if I don’t recant they would hold a major demonstration against me and thew would arrange bandits to deal with me wherever I go.

So I told the man to go and do whatever he wants to do that I’m equal to the task. Then I realise its not only a major demonstration but they may be planning to assassinate me.