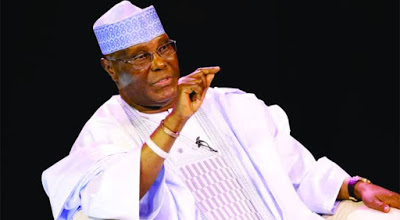 The presidential candidate of the People’s Democratic Party at the 2019 Nigerian general election, Atiku Abubakar has reacted to Saturday’s bank robbery in the Mpape area of Abuja, the nation’s capital.

The former vice president called for improved security of the country and its people next year, while he commended the security operatives who arrived at the scene on time to foil the attack.

I am proud of the proactiveness of the Nigerian Army and Police in foiling the bank robbery in Abuja.

It is my hope that this will be the face of a reinvigorated security in the new year.

His tweet came hours after a group of armed men attacked the commercial bank located at Mpape, a satellite town in the Federal Capital Territory (FCT).

The robbers, who arrived shooting, gained access into the bank but were blocked from leaving with their loot by a combined force of policemen and soldiers.

This was as a result of the prompt response by security operatives made up of men of the Nigeria Police Forces, Nigerian Army, and the Department of State Services (DSS) who positioned themselves strategically in the area.

After exchange of gunfire between the suspects and the security personnel which sees One of the robbers, who stepped outside, was sent back in with a hail of bullets and has been confirmed killed by police.