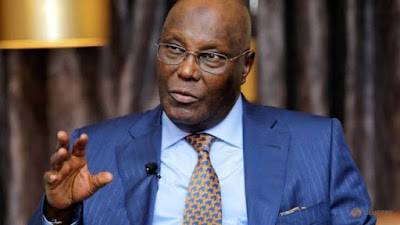 The former vice President and the presidential candidate of the People’s Democratic Party, PDP, in the 2019 general elections Atiku Abubakar has enjoined Nigerians to face the New Year in togetherness and work for a better future.

Atiku also tasked Nigerians to close ranks in a bid to wage a successful war against insecurity in the land.

The former vice president faulted claims that 2019 was a successful year, this he said In a message he personally signed and made available to journalists in Abuja.

In the message Atiku said:

The coming of the New Year 2020 is symbolic in many ways. First, it heralds a brand new decade. Secondly, and probably more important, is that this New Year will require us all to stay together more than ever before to take on, head front, the common enemy of insecurity that challenge our everyday lives as Nigerians.

I do not share the sentiment when some people claim that 2019 was a successful year for Nigerians. Such sentiment is reductionist and does the harm of making us have a false sense of victory.

The bitter truth is that Nigeria is still in the throes of economic instability, with more people losing jobs and the attendant outcome of more children being out of school and more families having hard time in accessing basic needs of life.

In this New Year, however, I will rather ask that Nigerians stand together with renewed vigour and determination to battle the hydra-headed demon of insecurity that has plagued us in the past decade.

poverty remains a virus that must be killed to pave way for the health of the nation and her citizens.

We must challenge the inadequacies that made us become the global headquarters of extreme poverty; much as we must work hard and fast enough to eliminate the scourge of out-of-school children in the country. These are the challenges that this new decade has thrown at us and we cannot afford to slumber and submit to defeat.

The problems of extreme poverty and scant investments in education play huge roles in fueling the problems of violent extremism that we spent the past decade contending with. We cannot win the fight against terrorism if we do nothing to reduce or eliminate poverty and illiteracy.

The reality of this new decade requires of us to recalibrate our approaches and to pursue some tough choices. If failure is not an option, then we must let go of our egos and conveniences.

In this new decade, we must start to do things differently if we are honest about our desire for a better and prosperous future.  There must be a deliberate effort to improve the material wellbeing of the people, by lifting millions of Nigerians out of the extreme poverty belt at a start, and to prosperity. Government must rethink many of its policies that are sinking more people into the abyss of extreme poverty.

It is incumbent on government at all levels to pursue policies that will provide decent housing to the mass majority; put food on the table; provide healthcare and education. We cannot continue to do things the same way and expect a different outcome. It is therefore high time we caused a rejig of economic policies that will promote an expansion of the economy and create jobs opportunities aplenty.

At the individual level, this moment calls for more empathy and sacrifice. The New Year and a new decade come with the opportunity to make better impressions in our lives and in the lives of people around us.

I wish to restate that our collective call for rule of law and our history about the struggle for democratic rule did not envisage a situation where judicial pronouncements would be worth less than the paper upon which they are rendered.

It is a bad advertisement for the country and its democracy if declarations made by the court are not respected without the executive arm of government agreeing to same. Any democracy is not worth the appellation if the principle of separation of power is not ingrained in it. In the New Year, government should not pretend to be democratic, but rather act according to the fundamentals of a democracy.

Above all, I expect that in the New Year there will be a better observance of rule of law and greater respect for citizens’ democratic rights. While we anticipate a change of attitude across board in the New Year and new decade, I wish every Nigerian a happy and prosperous 2020.