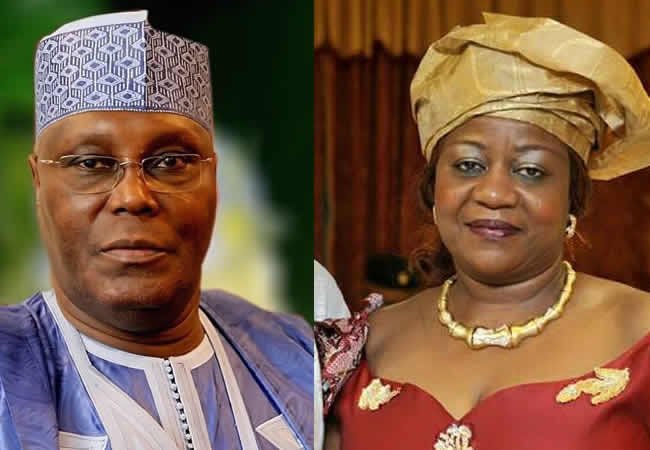 Former Vice President and PDP Presidential candidate in the last general elections, Atiku Abubakar, has filed a lawsuit against the Special Assistant on Social Media to President Muhammadu Buhari, Lauretta Onochie, for her alleged libelous tweet via her twitter handle on May 7, 2019.

In the suit filed on June 26th 2019 before the High Court of the Federal Capital Territory (FCT) by his lawyer, Mike Ozekhome (SAN), Atiku claimed Onochie alleged in her post, that he was on the watch list of security operatives in the United Arab Emirates and had traveled to shop for terrorists in the Middle East.  In a supporting affidavit, Atiku denied the allegation contained in the said tweet and stated that the tweet was “politically orchestrated” “solely to cause maximum damage” to his “high reputation.”

“To say that the claimant is shopping for terrorists knowing same to be untrue and without any foundation is not only dishonest and reckless but is calculated and politically designed to instigate security agents against him not only in the UAE but across the world,” he stated in his statement of claim accompanying the suit.
In a statement of claim, Atiku said he had in a May 14, 2019 letter, demanded an apology, retraction, and payment of N500m compensation from Onochie “to assuage” the damage allegedly caused him by her social media post.

Atiku stated that even when he threatened to sue her should she fail to accede to the demand within 48 hours, Onochie was unbothere by his demand letter. He noted that rather than show “remorse by retracting her earlier publication”, she further, on May 20, made “another derogatory publication and also published same globally online in the social and other print media” against his person. The former Vice President said sometimes in May this year, he had embarked on a foreign trip to the UAE as he had done over the years, and while on the said trip, Onochie on May 7, 2019, wrote, through her twitter handle:

“Atiku on UAE watchlist- Security sources Security operatives in the United Arab Emirates (UAE) are keeping a close tab on a former Nigerian Vice Pres Atiku Abubakar who has been in the Middle East nation for several weeks now What is he doing there? Me: Shopping for Terrorists?”he said
The claimant said “the defamatory publication” was also published by several newspapers nationwide and on several social media news.

He denied the allegations contained in the said publication which he described as “a figment of the imagination of the defendant”, but said it portrayed him “as an evil man, mentor of terrorists, someone who has links with terrorists, and a person who is interested in destabilizing the peace and unity of Nigeria.

“The publication also portrayed the claimant as a security threat and terrorist to right thinking members of the public and the society at large.

“The odious publication has clearly rubbished the claimant’s image and reputation. It has caused him national and international backlash and embarrassment and has done incalculable damage to him.

“He has thereby been subjected to the shame and infamy of being viewed by members of the public as not only corrupt but as a terrorist and sponsor of terrorism.” Atiku said

The claimant said he would tender the call logs showing the text messages, and calls received by him in the aftermath of Onochie’s post.

He described “the entire opprobrious and denigrating story” as “most misleading, baseless, false, malicious and totally bereft of any foundation howsoever”.

He noted that the “inference and grave conclusions” contained in the post were “politically orchestrated” and “invented by the defendant and others of her ilk, solely to cause maximum damage to the high reputation of the claimant, who is currently before the Election Petition Tribunal against her employer and boss, President Muhammadu Buhari, challenging the latter’s purported victory in the last presidential election.”

The claimant said contrary to the said “derogatory, disparaging, mendacious and unrestrained defamatory statement, as published in various print, electronic and online media platforms” he had “never been on the security watch list of the UAE, or any other country, for that matter.

“He has neither ever been denied entry into, interrogated, nor been declared wanted by the UAE Authorities, or any of its security agencies.  That Claimant was at the time of the said publication in the UAE and was never accosted by any security agencies over the said frivolous and baseless allegations.” he said
Atiku is praying for among others, a declaration that the publications made by Onochie via her social media accounts on May 7, and May 20, 2019, concerning and touching on his “are utterly false, baseless, unfounded and defamatory of the Claimant, and injurious to his reputation.”
He wants the court to direct Onochie to pay him N2,500,000,000,000 “representing general, aggravated, punitive and exemplary damages over the untold embarrassment, derision, public ridicule, odium, obloquy, marital disharmony, mental agony and psychological trauma which the defendant’s publications have caused the claimant.”
Atiku wants the court to compel the defendant to retract the publication and offer an apology to him “for the said offensive twitter and facebook publications on the same platforms, also to be published in three national newspapers with wide circulation within the country and also broadcast on AIT, Channels and NTA television stations.”