After Taliban Bomb Kills Civilians, Afghans Call For Foreign Compound To Be Closed 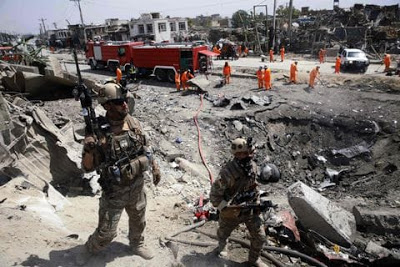 Around 500 protesters gathered outside a compound housing foreign nationals on Tuesday, calling for it to be shut down just hours after a bomb targeting the facility killed at least 16 people and wounded more than 100 others.

The powerful tractor bomb exploded at 10 p.m. outside the Green Village, a large compound in eastern Kabul where number of international organizations are based. The blast came even as the top U.S. negotiator in peace talks was on TV talking about how close an agreement was.

The attack shook Kabul and reignited fears that Taliban violence against civilians is on the rise, despite U.S. envoy Zalmay Khalilzad saying the United States has reached an agreement “in principle” with the militant group. According to the draft agreement Khalilzad described Monday, 5,400 U.S. troops would exit Afghanistan within around five months of a deal being signed.

The Taliban quickly asserted responsibility for Monday night’s attack, saying in a statement that they had targeted “foreign invaders.” But initial reports suggested the victims were entirely Afghans, including employees of the Green Village and three members of the security forces. Officials said around 400 foreign nationals were evacuated from the heavily guarded premises.

Footage from the scene showed extensive damage to the area, with a number of collapsed structures and a large crater where the explosion took place. Mud-built homes near the heavily guarded compound caved in from the impact.

This is the second time the Taliban has attacked the Green Village this year, stoking tensions among Afghans who live nearby and have borne the brunt of casualties. A gas station nearby also caught on fire.

“We will not let them here anymore,” one protester told ToloNews, referring to foreigners staying at the compound. “We are not ready to sacrifice our children and women because of them.”

In January, five people, including an Indian citizen, were killed in another Taliban attack on the compound. More than 100 others were wounded.

Khalilzad landed in Kabul on Sunday to brief Afghan officials on the draft agreement after wrapping up the latest round of peace talks with the Taliban in Qatar. The United States and the Taliban have met for nine rounds of talks over the past 10 months, in an effort to put an end to 18 years of war.