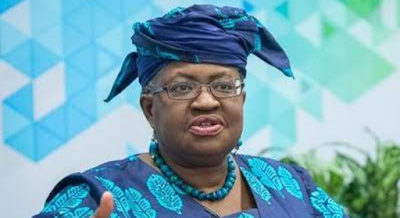 The African Union has disqualified Dr Ngozi Okonjo-Iweala from contesting for the office of the Director General of the World Trade Organisation, WTO.

The office of the legal counsel at the African Union had said that Iweala’s nomination was against laid-down rules as the executive council of the union in its 35th ordinary session that was held in Niamey, Niger, asked member countries to present candidates to the AU ministerial committee on candidature by November 30, 2019, to allow it endorse a consensus candidate at its February 2020 ordinary session.

In the letter dated June 15 and addressed to the permanent mission of the Republic of Nigeria to the African Union in Addis Ababa with Reference Number: BC/OLC/24/5056.20, the counsel said the nomination of Okonjo-Iweala violates Rule (11), 1, 2 and 3, Rule 12 and Rule 15(3) of the rules of procedure of the committee on candidatures within the International System of the AU as well as Council’s Decisions Ex CI 1072 (XXXV), Ec CI Dec 1090 (XXXVI) and Assembly Dec 795 (XXXIII).

During the February 2020 summit, the three candidates were considered.

However, due to the lack of consensus to agree on one suitable candidate during the February 2020 summit, the executive council through decision Ex Cl 1090 (XXXVI) recalled the Ex Cl Dec 10T2 (XXXV) and endorsed respectively the candidates from Benin, Egypt and Nigeria as shortlisted for the post of the director-general of the WTO (the names of the candidates were incorporated in the report of the committee on international candidatures presented to the executive council).

Moreover, it requested the ministerial committee on African candidatures within the international system to consider the matter and report to the executive council’s 3rd ordinary session with a view to agreeing on a single candidate

Facebook
Twitter
Pinterest
WhatsApp
Telegram
Email
Linkedin
ReddIt
Previous articleYou Are Nigeria’s Most Wanted Hacker, You Have A Case To Answer – EFCC To Hushpuppi
Next articleObaseki Can Rejoin Our Party Only If He Drops From Governorship Race – APC