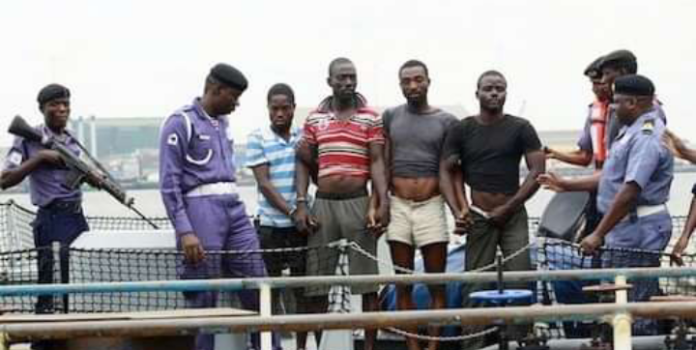 A 16-year-old and seven other suspected smugglers were arrested by the Nigerian Navy Ship (NNS) Victory for smuggling 1,522 bags of foreign bags of rice in Calabar, Cross River.

Speaking to journalists during the parade on Wednesday, the Commander, NNS Victory, Commodore Idi Abbas, disclosed that the suspects were intercepted in two batches.

Abbas said that the first group of four men were arrested on Sunday around Tom Short Island with a large wooden boat containing 1,482 bags of foreign parboiled rice.

He further revealed that the second group of four persons were arrested on Sept. 28 with two fibre boats, containing 40 bags of foreign rice, suspected to have been smuggled from Cameroon.

According to him, the confiscated items and eight suspects are hereby handed over to the Team Leader of Operation Border Drill for further investigations and prosecution.

We have been up and doing as part of our patrol effort not only to check smuggling but also curb all forms of criminality within our waterways.

We are aware that most times when kidnapping is carried out, the fastest way for them to escape is through the creeks, so we have placed our boats at vantage positions that you cannot go into the sea without being seen.

We all know that times are hard but no matter how hard times are, there are other ways of earning a living legitimately.

Nigeria is becoming unsafe for motorcycle thieves as angry mob are not taking it likely with them by placing death penalty on them when...
Read more
Crimes

A motorcycle thieve was set ablaze by angry mob in Benue after he stole a motorcycle belonging to a commercial bike rider. This is...
Read more
Crimes

Maryam Sanda, is set to approach the supreme court in a bid to upturn the death sentence handed to her by the federal high...
Read more
Crimes

Gunmen Rob POS Operator Of Money, Other Valuables Then Killed Her (Graphic Photo)

A point of sales, POS, operator was attacked and killed by armed robbers who also made away with her mobile phones and undisclosed amount...
Read more
Crimes

The death sentence handed to Maryam Sanda over the death of her husband, Bilyamin Mohammed Bello, has been affirmed by the court of appeal. The...
Read more