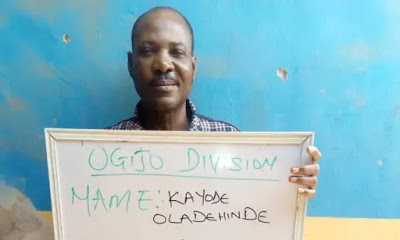 According to Abimbola Oyeyemi, the Ogun State Police Spokesperson, on Saturday said the 50-year-old Oladeinde was arrested following a report by his wife at the Ogijo police station, in Obafemi Owode Local Government Area of the state.

The wife, who had the girl with her former husband got to know about the incident when her daughter confessed that it was Oladeinde who had unlawful carnal knowledge of her.

ALSO READ: Pregnant Woman Goes Mad After She Was Dropped By Young Men In Imo

Oladeinde’s wife informed the police that her daughter informed her on February 4 that the suspect recently forcefully defiled her as a result of which she got pregnant.

According to the wife, her husband gave some drugs to the young girl, in an attempt to terminate the pregnancy, which resulted into serious bleeding.