28-year-old Rapes A 17-year-old, Pushed Her Into A Deep Gutter To Die 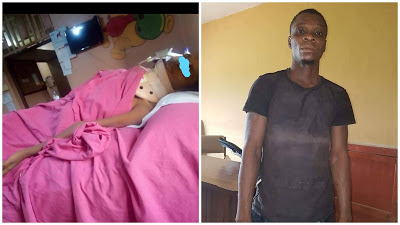 A 28-year-old man Robinson Godday, allegedly raped, beat and slam a 17-year-old Favour on the edges of sharp gutter and pushed in the deep gutter to die.

Favour who was coming from the factory where she had worked her shift was found two days after.

She was declared missing and when she was found in the pool of blood , almost unconscious, she was able to mutter who raped her and what happened.

The same man once attacked her and tried to rape in her room, she was beaten and her scream alerted the neighbors.

She was rescued and the case was reported, he was arrested but he was released thereafter.

Three weeks after this, he waylaid her while returning from her night shift and did this damage to her.

It was gathered that Favor is an orphan , her mom died in 2007 while her dad is still at the mortuary.