Home News General News 1985 Was The Last Time I Stepped Into A Bank – Tunde...
NewsGeneral News 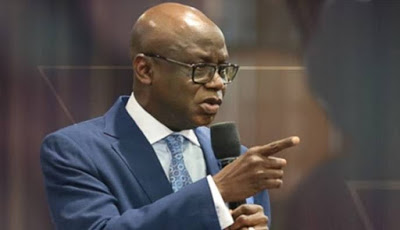 Tunde Bakare, a Nigerian Prophetic-Apostolic pastor and Senior Pastor of Latter Rain Ministry, has revealed that the last time he stepped into a bank for any transaction was in 1985.

The pastor recall how his mother was once told him, she will have bank accounts abroad, but the Lagos-based Preacher said banks always come to his home for transactions.

Pastor Bakare spoke on the topic ‘A Healthy, Robust Heavenly Bank Account’, also disclosed that other times he stepped into a banking hall would be to sanctify a new branch.

According to the pastor, he said;

I am not showing off as you will call it, I am only provoking you to charge up yourself.

These things don’t really have anything to do with education…If I can run bank accounts without visiting the banks, you too can. I don’t have two heads, neither does Dangote. Paying your tithe and offering doesn’t mean you have a heavenly bank account.

If you think I am going to rush this sermon, you missed. I am going to go slow, after all, our president is ‘Baba Go Slow’ and I am his very good friend.

To store up a treasure in heaven requires a different approach. Holding loosely and sharing freely and giving away heartily treasure for God’s kingdom purpose.