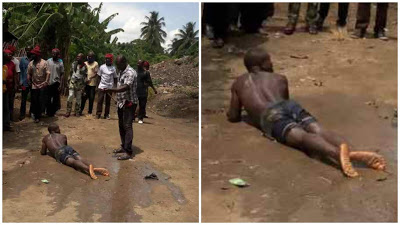 It was alleged that the victim was flogged over 36 strokes of the cane because of the post he made on Facebook against the Chairman of Afikpo North LGA, Hon. Ogbonnia Oko Enyim and some key stakeholders in the area.

The victim was supposed to be flogged 50 strokes of cane, if not for the timely intervention of his elder brother who paid cash (over 5,000) in exchange for the remaining 14 strokes.

The pastor reported that the Isu Oru age grade led by Amadi and deputised by Eze Ogbonna dragged him to the Ogo playground, tied his hands to his back and flogged him severally with canes.

This he said gave him multiple injuries on his body as they also poured water on him.